Tweets From The Tasting Room

This is a guest post from Mari Kane. She has worked in several tasting rooms throughout California and is now a writer, blogger and WordPress consultant living in Vancouver, BC. She blogs about wine at Tasting Room Confidential.com and about blogging at Blogsite studio.com. Follow her on Twitter, Facebook or Google Plus. 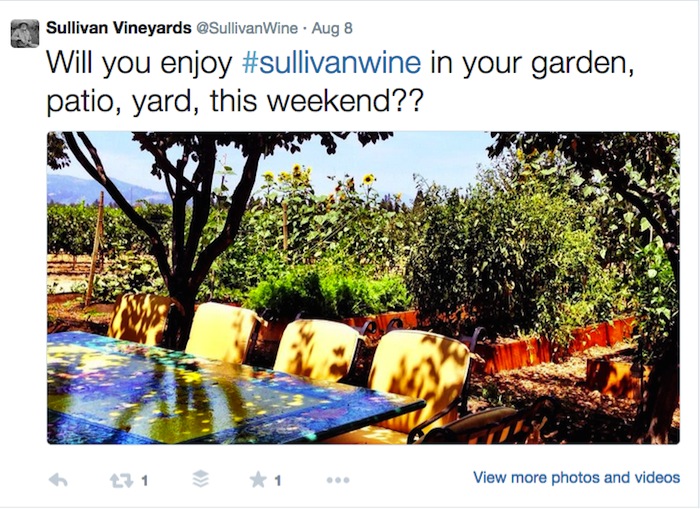 Twitter has emerged as the most efficient method to send a short message to the world and get engagement in return. The more people engage about a wine, the more they tend to buy, and that’s why Twitter has been such a boon to the wine industry.

It’s easy to whip up 140 characters for a tweet, and with conscious use of @ user names and # hashtags users can draw anyone into their conversation with one sentence. That ease is what makes Twitter perfect for the tasting room.

A typical day in a tasting room is punctuated with down time, after all the tourists leave, and by using that down time to send a few clever tweets, Twitter can help to call more customers in.

Since juicy stories unfold in a winery every day, the tweet material never ends. And with a photo attached the tweets are more likely to get retweets.

Here are some ideas and examples for tweets from the tasting room.

Use @ to tag the subjects of your rave. Then, hashtag #yourwinename to advise/congratulate/thank them about the wine they purchased.

Wines get released all year long. Tweet about every new bottling, the wine’s developing flavours, pairing suggestions, and places it’s available, all of which reminds followers to buy.

Harvest time and bottling days are exciting times in a winery and are worth numerous tweets a day.

Tweet about any upcoming event that involves your winery, before during, and after, and don’t forget to add a Twitpic.

Funny things happen all the time in a winery, and when they don’t you can always imagine them.

Pull a quote from a wine book and you’ve got yourself a tweet. Extra points for relating it to your wine.

Tweets from the tasting room is an important thing to do, but it can also be dangerous in the wrong hands. Tweeters must be deemed Twitter-fluent before being given passwords to the winery account. Always be upbeat. Avoid the personal, the political or religious. Don’t tweet anything remotely offensive.

How A Blog Helps You Engage Customers And Reach New Ones

Get expert tips on how to launch and maintain an engaging blog that drives SEO.

5 Things to Consider as You Prepare to Reopen

With some wineries already welcoming guests back to tasting rooms, we're focusing on what comes next.

How Round Pond Estate is Growing Online Sales